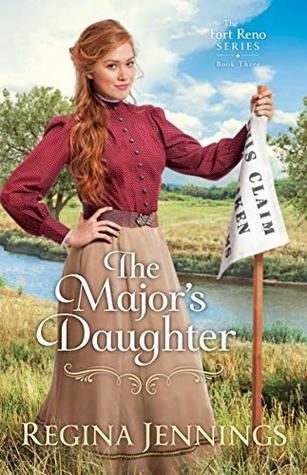 Caroline Adams returns to Indian Territory after tiring of confining society life. She wants adventure, and when she and her friend Amber come across swaggering outlaw Frisco Smith, his dreams for the new territory are very persuasive. With the much-anticipated land run about to happen, she may just join the rush.

Growing up an orphan, all Frisco Smith wanted was a place to call his own. It’s no wonder he fought to open the Unassigned Lands to people with the same longing. After years of sneaking across the border, he’s even managed to build a dugout house on a hidden piece of property he’s poised to claim.

But when the gun sounds, everyone’s best plans are thrown out the window in the chaos of the run. Caroline and Frisco find themselves battling over a claim–and both dig in their heels. Settling the rightful ownership will bring these two closer than they ever expected and change their ideas of what a true home looks like.

Frisco Smith is intelligent and seems tough on the outside. On the inside, however, he is still the scared little abandoned boy. Not only is he still grieving, but he believes that people don’t ever stick around. He wants to build his own town so that he is surrounded by people that won’t leave.

Caroline Adams wants to make a mark of her own as more than just the major’s daughter. She thinks a boarding house on her own 160 acres will do that.

When Caroline claims Frisco’s land, he is torn between wanting her to go and hoping she never leaves.

“Of course you’ve changed. That girl I admired, I don’t know her anymore. Instead of a beautiful wild vine, all I see now is another potted plant, trimmed and pruned to look like every other one out there. One that will only survive when handled delicately.”

There is so much meaning in the traveling case that Frisco carries around. He has never unpacked it because he only wants to unpack it when he has found his home. A place to belong. This really stuck with me throughout the story.

“He came back and found his traveling case. He paused after he opened the latches. The bag hadn’t been completely emptied since he was a child, and then someone else had packed it for him. He’d learned to keep his things ready for the unexpected, ready for heartache, and ready to be uprooted, but no longer.”

Frisco’s relationship with the other foundlings was special. It was heartbreaking how they tried to make their own little family but were torn apart from each other. Yet each one was trying to make their own way.

This book can easily be read as a standalone. However characters from previous books are in it. I love that this is also the continuation of Bradley and Amber’s story. I adored Bound and Determined but wanted to hear more of their adventures.

“He fell in love with you in August. In Oklahoma Territory, any two people who can tolerate each other in August are in love. Otherwise the heat would make them too cranky to bear.”

Jennings’ characters, story lines, and knowledge of history are all exceptional in this series. These books are both funny and tender. Even in the first chapter alone I had laughed multiple times, and Bucky the goat was a cute little sidekick.

This part of history has always interested me. I’ve read a lot about the homesteading on the 160 acres but the setting up of a town was fairly new to me. Reading the author’s note, it was amazing to find out how many things in this book actually happened.

The Major’s Daughter is exactly why I like the historical fiction genre. Not only does it have the interesting history, it also has romance, laughter, and extremely touching moments.

“He wanted a home, a family to belong to. She understood and was willing to join him, but he had to believe it would last. She couldn’t stake her future on someone who wasn’t sure he had one.”

One thought on “The Major’s Daughter – Review”

📚📚 📚 GIVEAWAY 📚📚📚
"In early June the world of leaf and blade and flowers explodes, and every sunset is different."
To Kiss A Wallflower is now available! Review and Blog Tour is on TimelessNovels.com
Check out my review and blog tour post for To Kiss a Wallflower on TimelessNovels.com today
I received some #bookmail from Abigail Wilson and decided to go on another book field trip. The cover and name of Within These Gilded Halls reminded me of the mansions in Newport, RI. I visited The Elms, Marble House, and The Breakers.
I had heard that if you like Downton Abbey and time split books, this is the book for you. I have never watched Downton Abbey, and I usually don't like time split books, but I really enjoyed When the Day Comes! I adored the characters, and I loved that I didn't know what was going to happen next in the story.
Happy Release Day to In Honor's Defense! You can see my review on TimelessNovels.com
Happy Release Day to Midnight's Budding Morrow! Check out TimelessNovels.com to win a copy.