From this day forward…

Thomas Granger has been married to his wife Lily for five years. The marriage has been proper, but without much affection, and the fault for that lays squarely on his own shoulders. He married her for her fortune and has hidden his true feelings until he felt redeemed enough to truly love her. Now his fortunes have been salvaged, so he aims to take the next major step in his life: wooing his wife.

Lily has been living with a broken heart from the day she married Thomas. What hope she had for a marriage of love has long faded, and she sees no reason to dream otherwise. When Thomas asks that she come with him to Cornwall to try a new adventure together, she takes the chance on one last hope in finding love in her marriage. Wrapped in the beauties and magic that only Cornwall can provide, she finds new life breathed into her, and into her feelings for her husband.

When their walls come down, when their pretense is gone, will they find the love each of them has sought? Or will the life they have known be all that remains?

Something Old was a unique read for me. Often times marriages during this era were either arranged or due to a love match. This book had a twist on that.

Thomas Granger had feelings for Lily but before he could begin an official courtship he loses his money in a bad investment. Since he was a friend of the family, he asks Lily’s father for her hand so he can use her dowry to repay the losses.

She refused to be a bluebell on the moors, blooming for only a short time and trampled into nothingness.

Not telling Lily what is going on was bad enough, but Thomas decides it is his penance to live without Lily’s love until he can earn back her dowry, and they are financially stable.

While still a closed door book, there was a lot more of the physical side of their relationship in this book. While this is understandable since they are a married couple, I would have liked some more meaningful conversations between them.

She had always been whole as herself, but now she was more. Thomas, and loving Thomas, had given her wings, and now she was learning to fly.

After they learn to communicate with each other, they are able to grow a lot closer. Though there are still sometimes they seem more comfortable confiding in their friends.

Speaking of those friends, I loved Thomas’ group of friends and how they tried to “help” him.

But in her own chambers, she did not want something so perfect, so fine, so cultivated. She wanted the delicate, the wild, the underappreciated, and the natural. She wanted the fragrance that captured being out on the moors and hills, perhaps even standing on the beach with the waves rolling in. She wanted to capture Cornwall in flowers and have a portion of that in her chambers.

Cornwall is a very important location in this book, and I love all the descriptions of it.

I also loved the appearances of some favorite characters from previous books. And there were some new characters in this book that I hope get their own story.

*This book is clean, however, it does have some cursing.

Set adrift on the tides of fate by the deaths of her parents and left wanting answers, Laura Callaway now lives with her uncle and his disapproving wife in North Cornwall. There she feels like a castaway, always viewed as an outsider even as she yearns to belong.

While wreckers search for valuables along the windswept Cornwall coast–known for its many shipwrecks but few survivors–Laura searches for clues to the lives lost so she can write letters to next of kin and return keepsakes to rightful owners. When a man is washed ashore after a wreck, Laura acts quickly to protect him from a local smuggler determined to destroy him.

As Laura and a neighbor care for the survivor, they discover he has curious wounds and, although he speaks in careful, educated English, his accent seems odd. Other clues wash ashore, and Laura soon realizes he is not who he seems to be. Despite the evidence against him, the mysterious man might provide her only chance to discover the truth about her parents’ fate. With danger pursuing them from every side, and an unexpected attraction growing between them, will Laura ever find the answers she seeks?

First of all, check out the cover! Besides the beautiful image, it has a pearl finish that I have not seen on a book before. It is very eye catching.

We are introduced to Laura Callaway who feels like she doesn’t belong anywhere and is like a castaway who has no place to call home. Not long later she saves Alexander who is an actual castaway from a shipwreck. It is clear from the beginning that he is hiding something, but she still feels drawn to him. Together they will look for the answers they both need.

This book was lighter on the romance. It focused more on the historical elements and the mystery. Klassen has clearly done a lot of research in writing this book. There were so many things I learned about Cornwall.

I was really interested in the Sinkininny church. A church covered by sand where they lowered the pastor through the roof sounds crazy. I love that it’s true. Sometimes truth really is stranger than fiction. There were so many interesting historical things that were weaved throughout the story. 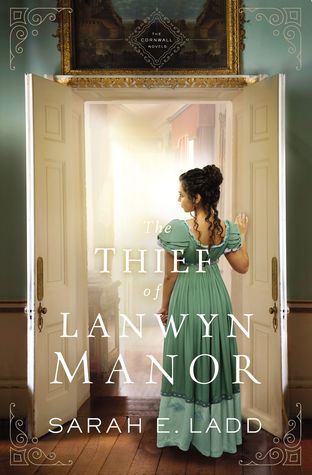 In Regency England an advantageous match could set up a lady for life. Julia knows Matthew Blake, copper mine owner and very eligible bachelor, is the gentleman she should set her eyes upon. But why can’t she steal her gaze away from his younger brother, Isaac?

Julia Twethewey needs a diversion to mend her broken heart, so when her cousin invites her to Lanwyn Manor, Julia eagerly accepts. The manor is located at the heart of Cornwall’s mining industry, and as a guest Julia is swept into its intricate world. It’s not long, though, before she realizes something dark lurks within the home’s ancient halls.

As a respected mine owner’s younger son, Isaac Blake is determined to keep his late father’s legacy alive through the family business, despite his brother’s careless attitude. In order to save their livelihood—and that of the people around them—the brothers approach the master of Lanwyn Manor with plans to bolster the floundering local industry. Isaac can’t deny his attraction to the man’s charming niece, but his brother has made clear his intentions to court the lovely visitor. And Isaac knows his place.

When tragedy strikes, mysteries arise, and valuables go missing, Julia and Isaac find they are pulled together in a swirl of strange circumstances, but despite their best efforts to bow to social expectations, their hearts aren’t so keen to surrender.

Sarah E. Ladd puts a lot of research into her books before she ever puts pen to paper and it shows. It brings the reader into that world, and her characters always make you feel so emotionally invested in them.

I like that Isaac Blake is a different kind of hero. While his twin brother Matthew is richer and more charming, Isaac is quiet, loyal, and caring.

Julia Twethewey just wants to find where she belongs. She tries to help people but is turned away numerous times and is even threatened.

This book has a gothic feel, and I love the mystery throughout it. It is the second in The Cornwall Novels series but can be read as a stand-alone.