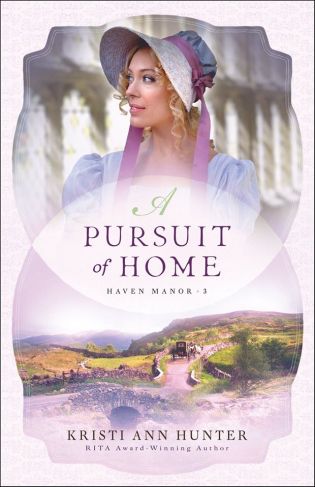 In early 1800s England, Jess Beauchene has spent most of her life in hiding and always on the move in an effort to leave her past far behind her. But when she learns the family she thought had died just might be alive and in danger, she knows her secrets can only stay buried for so long.

Derek Thornbury loves the past, which has led him to become an expert in history and artifacts. He knows Jess has never liked him, but when she requests his help deciphering the clues laid out in an old family diary, he can’t resist the urge to solve the puzzle.

As Jess and Derek race to find the hidden artifact before her family’s enemies, they learn as much about each other as they do about the past. But can their search to uncover the truth and set history right lead to a future together?

The reader is immediately drawn into A Pursuit of Home by a story from Jess Beuchene’s past in the intense prologue.

Throughout the book there is an important mystery that must be solved. It will lead Jess Beuchene and Derek Thornbury on a journey together where they must rely on each other.

Jess and Derek are so different. He is book smart and her intelligence comes from her unique life experiences.

“He always seemed perfectly happy to be his odd self.”

He is so awkward and could spend every moment discussing paintings or telling someone a random fact.

“At least he was moving toward the carriage, even if he couldn’t stop himself from reciting every obscure fact about the smallest thing that no one in his vicinity even knew about, much less cared for.”

Even when Derek thinks of his attraction for Jess, he thinks of it from a painting’s perspective. Jess sees people and their actions and motives. She doesn’t want to get close to people because of what she has lost, and she doesn’t want to be emotional.

“Anyone who insisted on foisting their romantic notions on her could find themselves with ipecac in their tea.”

Although they are so opposite and even argue with each other in multiple languages, they are still perfect together. This is especially true when they are able to open up, like the really sweet scene when Derek is teaching Jess how to knit.

My favorite book by Hunter is A Noble Masquerade and I absolutely love that Ryland and Miranda return in Jess’ story. While there are returning characters from the Hawthorne House series and others from the earlier books in the Haven Manor series, any of these books can be enjoyed on their own.

A Pursuit of Home is a story of mystery, adventure, and love that will keep you guessing what will happen next.

One thought on “A Pursuit of Home – Review”