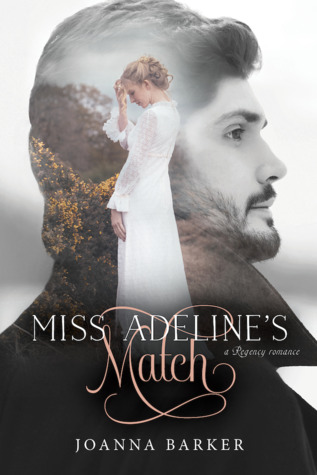 Miss Adeline Hayes is the perfect lady’s companion: pleasant, conversational, and unceasingly proper. But when her closest friend, Charity Edgeworth, breaks off her arranged marriage without explanation, even Adeline’s superior skills are put to the test. Charity’s father banishes the two young women to the country, sending Adeline with a charge to find Charity a husband or suffer dire consequences.

As Adeline takes on the role of reluctant matchmaker, she discovers more than one obstacle in her path. Not only does Charity prefer escaping in books to socializing, but Adeline soon finds her own attentions distracted by the standoffish–and irritatingly handsome–Mr. Evan Whitfield. Amidst an eventful foxhunt and the unexpected arrival of Charity’s former betrothed, Adeline simply doesn’t have time for a battle of wits with Evan. But the two are continually drawn together until Adeline begins to question her tightly guarded convictions about love and marriage.

However, when secrets are revealed and truths made known, Adeline must face her most fearsome obstacle yet: herself.

Adeline Hayes is a companion who must always appear perfect and act properly.  She is put in a tough spot between her employer, her family, and her best friend.

Evan Whitfield comes off as brooding and standoffish, but he is hiding a deep hurt from his past and only wants to be a better and more worthy person.

Adeline and Evan both feel drawn to help people and that draws them together. Evan is older and already learned from his mistakes, while Adeline still has a lot of growing up to do.  Adeline reminded me of Jane Austen’s well-intentioned Emma who tried matchmaking but always ended up making things worse. Evan has Mr. Darcy’s brooding down, but he seems friendlier.

Adeline’s best friend Charity is running from a broken engagement. I found the story-line between her and Henley very interesting and wondered if there was more to the story than she overheard. I also don’t know why she shared all her secrets with Adeline but it took her so long to tell her the one involving Henley.

Joanna Barker writes very realistic characters which means at times I’m not always happy with them. Addie makes a number of really poor choices. There are legitimate reasons why she made these decisions, but they were still wrong.  Barker’s books are also interesting and non-predictable. It always seemed like the worst timing when I had to put the book down to get something done.

Some of my favorite quotes:

“My heart belonged to no one, and I intended to keep it that way.”

“How little I felt then, caught up in my own world, in things that were not so very important.”

“There was nothing like a child’s honesty to keep one humble.”

“If I find a person who can move beyond the more frivolous topics of conversation, I find it worth my time to know them better.”

Happy Book Birthday to Winning the Gentleman!
Winning the Gentleman by Kristi Ann Hunter releases tomorrow. Aaron Whitworth gets his own story!
Rebecca Connolly is one of my favorite authors, and I am really looking forward to reading "Something Old" which releases in just a few weeks. If you haven't read it yet, you should check out "Fortune Favors the Sparrow" from her Agents of the Convent series which was her most recent release. If she is a new author to you, my favorite books of hers are "An Arrangement of Sorts" and "The Lady and the Gent". Though they can be read as stand-alones, they both happen to be the start of a series, and you will want to keep reading them all. :)
Have you met Lord Bryant? He makes appearances in A Proper Scandal and A Proper Charade by Esther Hatch. The first two books in the series are available now and his story (A Proper Scoundrel) is coming next month. You can preorder it now. I love this series!
Charity Standish's story "Pining for Lord Lockhart" releases today. This is such a fun series! Check out the review on TimelessNovels.com
Happy Release Day to The Indebted Earl! This series has been so good!! You can find the review and a chance to win a Kindle Fire on TimelessNovels.com
Captain Charles Malvern first starts to care for Lady Sophia Haverly in a letter. Some of my favorite books have some pretty memorable love letters in them.
Refining the Debutante is a book you will not want to put down. I loved Miranda and Ethan from the very beginning. I had already felt so invested in their relationship from the very first chapters and felt somewhat protective of it. This is a story of learning more and growing, and you won't want to miss it.