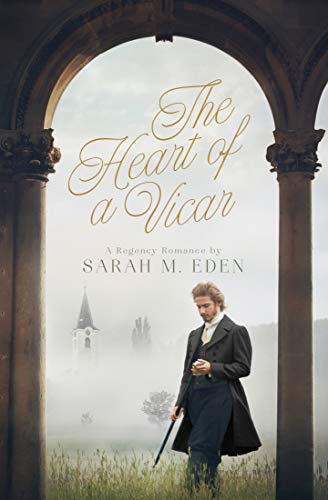 Young love is all too fleeting, as Harold Jonquil painfully discovered years ago when Sarah Sarvol, the niece of a neighboring landowner, captured his heart. After an idyllic few weeks in the throes of blossoming love, reality intervened. They could have no future. Following their disastrous parting, Harold attempted to push aside thoughts of love and regret, but Sarah has never left his heart. Now, years later, he has achieved his lifelong aspiration of becoming the local vicar. However, the role proves more difficult than he imagined. He feels hollow and uninspired—until the most important person in his past returns, challenging him as no one ever has.

When Sarah’s ailing uncle summons her back to the family estate in England, there is only one person from her past she is reluctant to see again: Harold Jonquil, the only man who has ever claimed her heart. But when she comes face-to-face with her former beau, she hardly recognizes the aloof and dull man before her. She is determined to help Harold rediscover the passion he once felt toward his chosen profession. Soon, despite their exasperation with each other, they cannot deny the stirring of feelings long buried—but is it too late for second chances?

In true Sarah M. Eden fashion, we have complex characters that we really care about (how could we not love the Jonquils!) and beautiful moments as well as funny ones. This book has everything you could ask for.

Sarah Sarvol has left America and returned with her brother Scott to England. Having spent time in the area as a child, she is returning to her uncle’s house so her brother can learn his duties as the heir. Her uncle has no use for females and considers her a poor relation. She is forced to live in the governess quarters and not socialize with others. Even through her trials, Sarah believes you make your own happiness and is a very outgoing and optimistic person.

Harold Jonquil has spent his life knowing that he would be a vicar, and he has been ridiculed by his brothers for it. They love calling him “Holy Harry” and using the term pious as an insult.

Harold has always looked up to his father and considered him exemplary. His goal is to emulate him and follow his advice. “Act well your part; there all the honor lies.” He believes that this means he must always be serious and hide all of his “strange” tendencies like climbing things like a monkey and singing songs about drinking.

Harold and Sarah were once sweet on each other until something happened that left them both heartbroken; and Harold soaking wet. Years later they are reunited and drawn together by a challenge.

I have been looking forward to reading Harold’s story. I knew there had to be a reason for him being so serious and proper all the time. This was not the story I expected. While the reasons behind Harold’s mask were similar to what I anticipated, I never expected the real Harold hiding underneath! He has some unusual and really fun quirks, and I loved seeing his relationship with Sarah. There is such a sweet tenderness with those two that is like calm in all the chaos.

Harold is so lonely and vulnerable. He is an introvert and has problems socializing with others. His belief of how the perfect vicar is to behave causes him to be even further separated from people, and he keeps his true self hidden. He is such a fun person when he is in personal settings and allowed to be himself. I loved his relationship with his housekeeper.

None of the Jonquil relationships are easy. They deeply love each other and grow closer together as they go through emotional and even heartbreaking times.

The Heart of a Vicar is the sixth book in the The Jonquil Brothers Series. So many beloved characters from previous books come back and even play large roles in the story. Philip and Sorrel have been such a special couple to me since the first book, and it is heartbreaking to see what they have to go through. Layton, another one of my favorite characters from a previous book, is still going through a lot of emotional turmoil as is his daughter. Just as in real life, things do not always wrap up easily. While this book can be read as a standalone, I love how many story-lines continue with previous characters. This book makes me want to binge read this entire series again.