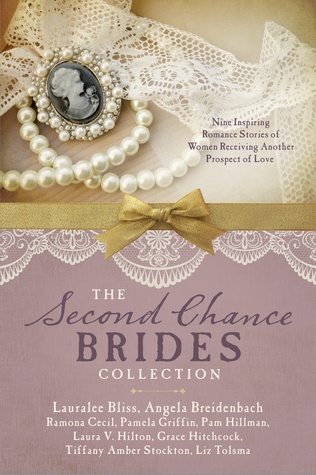 Meet nine women who each believe their chance for lifelong love has passed them by. From the girls who lost their beaus to war, to the wallflowers overshadowed by others, and the widows deeply hurt by their loss, the desire to love and be loved spans American history from 1777 to 1944. Experience the sweet pull of romance on each life and the blossom of faith that leads them to brighter futures.

Love in the Crossfire by Lauralee Bliss

Gretchen is engaged to Rolf, a Loyalist sympathizer who dies fighting in the war. Yet, she struggles with what side of the war she believes in. On the same day that Gretchen finds out her fiancé has died, she meets Jake Rowlings, a man with the Continentals hiding out in her barn trying to stay warm.

-Gretchen kissing and falling in love with Jake so soon after her fiancé died seems wrong.

-I found Jake entirely too full of himself. He seemed to think he single handedly would win the war.

Montenegrin Lukas Filips has left his homeland and his title for the opportunities in America. He takes a job working as a mining foreman to earn enough money to support his mother and sister back home.

Juliana’s husband was killed by a Montenegrin and now she lives as a widow baker to earn money. She dreams of one day earning enough money to open her own bakery.

-This was an interesting story that had action as well as romance. It was very well developed, especially for a novella.

-I would love a continuation of this story. I would be interested in their story as well as hearing more about Lukas’ mother and sister.

Widow Matilda must make money to cover the debt her Captain father and seafaring husband have left her after they died, so she poses as a cabin boy where she meets Tom a harpooner.

Matilda has vowed to never again give her heart to a seaman. Tom is hiding the fact that he is the reason for the death of Matilda’s father and husband. Will their pasts keep them apart?

-There are a lot of disgusting things that happen in whaling but I thought the author did a good job with the way she wrote about it.

-I love that Matilda was so committed to bringing Tom’s heart to God.

The Substitute Husband and the Unexpected Bride by Pamela Griffin

Cecily plans to enter a marriage of convenience with Zeke, a boy she knew of from her hometown in Massachusetts. After her long journey to Seattle, she learns that Zeke has died.

Due to the guilt that Garrett feels for the part he played in Zeke’s death, he offers marriage to Cecily.

Cecily thinks that Garrett would be happier married to the widow Brown who looks perfect to Cecily but makes rude comments. Garrett believes Cecily doesn’t return his feelings, so he hides himself away. Will their misunderstandings ruin any chance of a happy marriage?

-I like the characters, but I wish there were more interactions between Paul and Gwen. Paul and Gwen seemed to lack some personality.

-The widow Brown’s mention of how in love Garrett and his first wife, Linda, were was the perfect way to unnerve Cecily.

The Widow of St. Charles Avenue by Grace Hitchcock

On the day Colette starts to come out of mourning her late husband, Robert, she runs into Norman Hartley the former boy next door who had moved to New York when he was twenty.

Robert had forbid Colette of doing charity work but after his death she decides to teach Bible class. She meets the pastor’s con, Malcolm Reilly, who wants her to help teach a boy’s Bible class.

One man believes in her dream of building a school for the orphan boys but one doesn’t. Will she make the right decision?

-I’m curious as to how the boys who got to attend the school were chosen. It is obviously a huge benefit to live at the school instead of the orphanage.

-The story of the ink ribbon was cute.

-This novella had things that were predictable but I enjoyed the story.

Evelyn is the topic of town gossip when she leaves Ollie at the altar because she knows he is in love with another woman.

Cole is new to town and looking to build a cattle ranch when he is called upon to help Evelyn with shepherding.

-I liked the scene at the beginning of the book with how Evelyn and Cole met.

-Ollie and Angie never should have allowed Evelyn to take the blame for backing out of the wedding.

-I don’t really understand why Evelyn is described as prickly.

-I enjoyed this novella but it seemed to end abruptly.

Thomas Hale has been hiding out after a girl he formally courted ruined his reputation by lying and telling everyone he was a spy and had an improper relationship with a maid. He lives in seclusion until he meets Bessie O’Hara. Archie notices his best friend’s interest in Bessie so he arranges a “pretend” wedding for an advertising campaign that turns out to be real.

-The courting period and falling in love after the wedding was rushed and skipped over.

-Since they were already married, I understand Thomas and Bessie respecting their parents but getting their permission didn’t make sense to me.

-Even after the marriage, Bessie seems to think she would have been happy with any random husband she had handed to her.

-I enjoyed the plot and the beginning of the story but didn’t like it as well at the rushed parts.

Love in Disguise by Amber Stockton

Anna St. Claire leaves her life in New York to move to Breckenridge, Colorado in order to escape living in her sister’s shadow.

Trevor leaves his business life in New York and moves to Colorado to live as a cowboy.

Anna had feelings for Trevor in the past but he never noticed her, so when he meets her in Colorado, Anna hides who she really is from him.

As a highly eligible bachelor, Trevor is overcome by numerous women he has no interest in. Anna agrees to pretend to be courting him in order to fend off the other women.

-I found it unusual that Trevor would ask someone he thought was a stranger to fake a courtship with him as soon as he meets her.

-Anna having her picture in the paper and the description written about her also seemed odd.

-I have lots of questions about their future and wonder how their relationship issues would have been resolved without the fire happening.

What the Heart Sees by Liz Tolsma

Miriam Bradford spent a summer with her mother in Germany where she met and courted Paul Albrecht. Five years later they meet again when Paul is a German POW in Miriam’s American hometown.

-Miriam convincing Paul to break the rules and leave the camp was wrong. She seemed to do it because she was bored and wanted to have an adventure.

-I really like that the preacher is holding services for the POWs and is really concerned with their spiritual health regardless of the town’s opinion on the matter.

-The author makes good use of the passage of time to advance the story along.

-A lot of times I like reading more lighthearted novels and this wasn’t one. However, I really enjoyed it. It was interesting and made you think.

-I haven’t read a lot of stories from this time period and am not a fan of war stories but this was really well done.

This was a good selection of novellas and I would rate it a 4/5 stars. I received an ARC but the opinions expressed here are 100% my own.